Where can I buy a Zither, or strings?

New Zithers cost anything from EURO 1500 upward, most of the manufacturers are found in Southern Germany or Austria.

You could buy a new instrument even visit a factory or zither builder when on holidays in Europe, or try buying second hand. There are some good zithers of the traditional designs available in Germany/Austria; young professional players now often prefer custom made larger bodied, odd shaped zithers.

Don’t buy extra long strings unless you have a harp zither. Nylon strings are kinder on the fingers.

When ordering strings consider sending the manufacturer a photo of your zither and a count of the number of strings.

There are always 5 melody strings, but you could have between 26 and 45 accompaniment strings.

Also measure the length of the fretboard (called Griffbrettmensur in German), could be between 38 cm and 45.5 cm.

You can buy zither strings at: 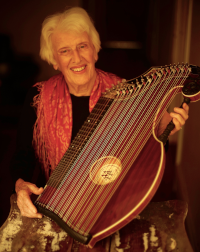